“A japanese martial art (Aikido) is far more than just the techniques in its catalogue, it is a culture, a mindset, a world view and at times a spiritual endeavour”…….Ellis Amdur sensei (from the book Hidden in Plain Sight)

Aikido is commonly referred to as “The Way of Harmony” , however this is probably a rather idealistic interpretation of  the kanji. A more accurate presentation would be “The Way of Aiki”, where the term Aiki means  to join (ai) with energy (ki).

In Budo, Aiki is a principle  in which the defender blends (without clashing) with the attacker, then goes on to control the assailant using the application of internal dynamics (kokyu ryoku) to effect techniques. Blending with an attacker’s movements allows the Aiki practitioner to control the actions of the attacker with minimal effort. One applies aiki by understanding the rhythm and intent of the attacker to find the optimal position and timing to apply a counter-technique.

“The art of peace (aikido) is the principle of non-resistance.
Because it is non-resistant, it is victorious from the beginning.”
………O’sensei Morihei Ueshiba 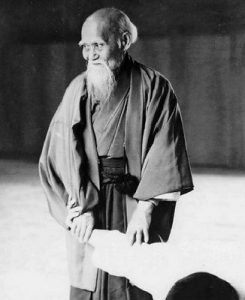 Aikido is, in name, a modern martial art being derived and developed in the early 20th century by Morihei Ueshiba, commonly referred to as “O’sensei”, an immensely talented martial artist and deeply spiritual man. Morihei devoted his life to the study of Budo and spirituality and Aikido is a synthesis of the various “Ways” that he studied. Although from many sources, perhaps the greatest influence on Aikido was Daito Ryu Aikijujitsu as taught to Morihei by Takeda Sokaku sensei. Whilst comparitively modern, Aikido is a direct decendant of ancient forms of Bujutsu (fighting arts of the Samurai warrior) and  deeply rooted in the wisdom of Japans indigenous religion of Shinto, in Zen Buddhism ,Taoism and Confucianism.

At its most basic level Aikido is an effective defensive martial art which relies not on physical strength but on the use of “Aiki” as described above. Although regarded as primarily defensive, Aikido is not by any means passive and allows the defender to take the initative when appropriate. What seperates aikido from other Budo is that it is not essentially destructive and seeks ultimately to protect the attacker, ideally by avoiding the confrontation.

“The  Way of a Warrior is to stop trouble before it starts.
It consists of defeating your adversaries spiritually by making them realise the folly of their actions”
………O’sensei Morihei Ueshiba 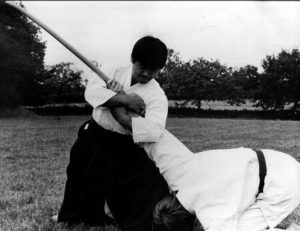 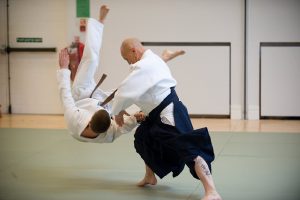 The Aikido repertoire has numerous techniques in order to deal with the numerous attacking possibilities that exist. To assist in the learning of these techniques they are traditionally organised into groups with common principles or applications. Techniques  conclude generally in 2 ways, either with a projection (nage waza) or with a pin (osae waza).
The techniques however are the means and not the end, the true principles of aikido , which can only be learned over a long period of time, relate to timing, control of space , effective use of the unified power of the body (Kokyu Ryoku) and perhaps most important of all maintaining a clear and undisturbed mind under any circumstances (Fudoshin).

“Depending on the circumstances you should be: hard as a diamond, supple as a willow, smooth flowing like water or as empty as space.”
……O’sensei Morihei Ueshiba 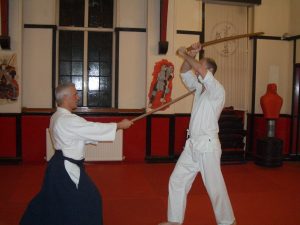 Although primarily an “empty-hand art” Aikido derives largely from Kenjutsu (traditional Japanese sword fighting) which is evident in the postures, movements and hand positions used.  Complete aikido training therefore incorporates the use of certain traditional Japanese weapons, namely the BOKKEN (a wooden replica of the Samurai sword), the JO (a 4ft oak staff) and the TANTO (Japanese dagger), this involves both basic skills in using the weapon and techniques for disarming a weapon carrier.

Ultimately training in Aikido is not just about mastery of physical techniques, but is a holistic discipline for body, mind and spirit  whose aim is to make us more enlightened  people, so that we can live a more meaningful life and, if desired, make a better contribution to society in general.

“Foster and polish
The warrior spirit
While serving in the world;
Illuminate the path
According to your inner light”