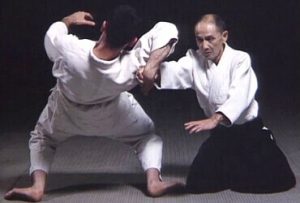 “A Highly Structured System based on clear Principles”

Gozo Shioda was uchi-deshi at Aikido founder, Morihei Ueshiba’s kobukan dojo (nickname – “hell dojo”) during the 1930’s and early 40’s. Shioda stated that his Yoshinkan Aikido style was a faithfull rendering  of the Aiki Budo that Ueshiba taught at that time, when he was reputedly at his technical peak.
Shioda sensei however,  wanted more structure and consistency in the training process, so he created a logical and highly structured method in which beginning students would learn the foundation principles of aikido by constant repetition of clearly defined forms. This emphasis placed on correct form in the early stages rather than flow and timing is the trademark of Yoshinkan and contributes to the Yoshinkans  image as a “hard” style. 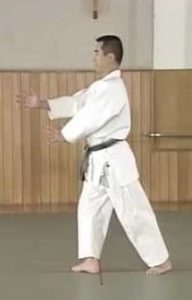 “Training to Build an Aiki Body”

Yoshinkan training begins with the training of posture or kamae. Important principles include ground connection, hip alignment and  maintaining of a strong centre line.
Movement involves keeping the hips low and aligned perpendicular to the line of movement. The front knee is kept flexed and the rear straight, positive contact is maintained with the ground. The driving force of this movement is all from the lower body, the larger muscles of the legs and buttocks whilst the koshi (hips), becomes the driver, controlling power distribution and direction.
Much emphasis is placed on maintaining a unified body (zentai).  To facilitate this the pelvis is slightly rotated forwards producing a concavity in the lower back and sets up a tension which maintains a connection between upper and lower bodies whilst simultaneously pushing the hara forwards to increase the feeling of centredness.
In order to transmit this unified body power (zentai ryoku) through the arms an unbending arm is maintained at all times, with elbows kept down facing and the armpits closed to maintain connection with the body.
A fundamental principle of the Yoshinkan system, and a very pragmatic one, is that one must learn to control ones self before controlling an opponent.  Students therefore progress from the solo exercises of basic kamae and kihon dosa (basic movements) to paired kihon waza (highly structured basic techniques in kata form) and then on to more advanced applications and jiyu waza.
Along with kamae(basic stance), there are 6 “kihon dosa” or basic movements which are considered to be the building blocks of the 150 or so basic techniques. Yoshinkan aikido students practice these repeatedly to understand how to move their kamae around to put themselves in a strong position and to maintain a centred and unified body. Without proper form in one’s basic movements one’s aikido will not be effective. By maintaining a strong centred kamae throughout the phases of a technique one cultivates chushin ryoku (centre power) which with experience and mastery of timing and distance develops into kokyu ryoku or breath power, the ultimate aim of Yoshinkan Aikido. The basic techniques of the Yoshinkan are actually kata in the traditional sense of the word, a series of predetermined movements for both sh’te and uke. Whilst the waza are based on sound aikido principles they do not necessarily represent the most efficient method of applying a given technique, rather they are designed to further develop strong kamae, balanced movement , timing and correct distance. The kihon waza contain definite repeating patterns of movement which are essentially the kihon dosa movements. Hence the system is self reinforcing and sustaining.
In Yoshinkan kihon waza, the relationship between uke and sh’te is quite unique since there is no competition involved, instead the respective roles are used to promote mutual learning, to develop harmony and strong, correct technique. 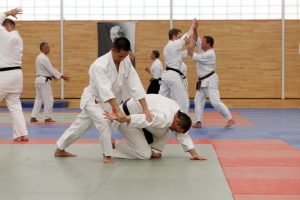 Students progress from Kihon waza (both tachi and suwari) to Oyo waza (advanced or applied techniques), Jiyu Waza (freeform techniques) and Goshin waza (practical applications). Whilst weapons techniques are practiced there is minimal content within the basic grading syllabus and Bukiwaza is considered more an adjunct to open hand technique, though some Yoshinkan schools have incorporated either Iwama style buki-waza or another style of kenjutsu/jojutsu .
Tsutomu Chida sensei, former head of Yoshinkans Hombu dojo in Tokyo, describes the progression in Yoshinkan aikido as follows: “In the beginning, Yoshinkan is sort of hard and stiff; because of this, it looks like guys are really attacking each other, but this is just the first level.” He adds that Yoshinkan follows the teachings of O’sensei in his use of the analogy of the progression from solid ice (physical), to water’s ethereal fluidity and eventually to air, whose near intangibility transcends the baser elements. But there are no short cuts. Ice cannot evaporate into air without first melting into water, as it were, via a trial by fire.
It is said that while other aikido schools focus more on finding an opponent’s weakness or on blending movements, Yoshinkan focuses more on  making sh’te,( the doer of the technique), strong and balanced, yet still relaxed. It has been said that Yoshinkan aikido, rather than being a “style” of aikido, is really just a training method, and it is generally recognised that in the advanced stages all aikido styles merge to become one Budo.